To fully experience the unique and exciting culture of New York City, you need to dive beneath the paved city streets, into one of the most iconic places in the city: the subway.

Aside from screeching trains, the country's largest, most expansive transit system is also home to drummers, dancers, guitarists, and more. Underground, the city has a soundtrack all its own.

But, who are these talented musicians that often go unknown? We asked ten artists to share their stories about life as an underground artist in New York City. We wound up with a collection of stories as diverse as the city. No matter their backgrounds, each of these artists represents the best of the city and what the New York is really about: 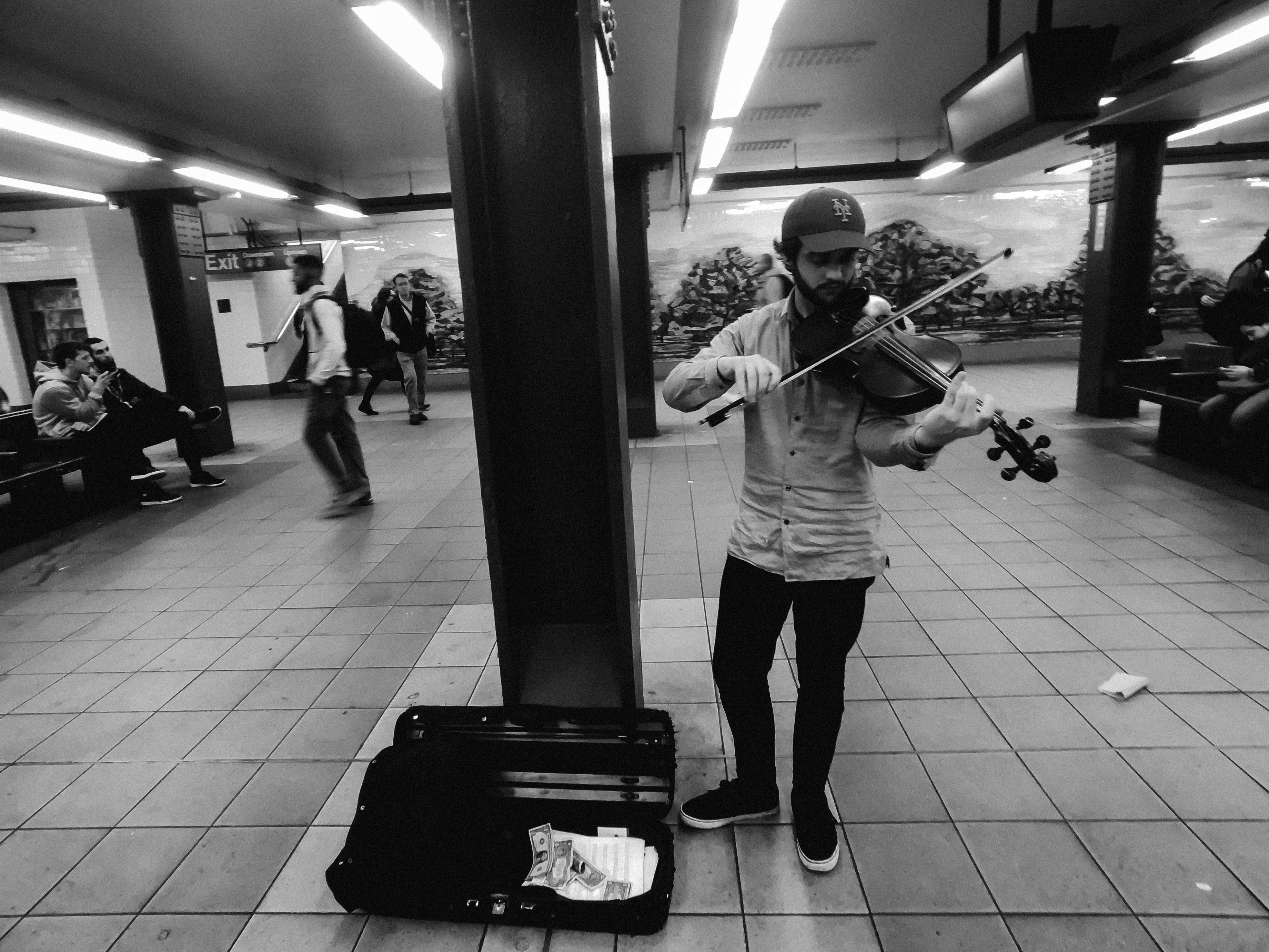 “I started playing back in Richmond, Virginia for beer money, and it became beer money and gas money. At the time, I was living in people's basements and out of my car and doing short tours of the mid atlantic. I was able to play a show in NY. When I moved here, I realized how much easier it would be to play underground–I could play year round because it’s the subway. I don't have to worry so much about the weather.

I busk a lot. For a while, I was just living off that. Now I bartend a little. From busking, I’ve gotten gigs like weddings, private events. I’ve also met band members this way.

I get harassed by cops all the time. It can be infuriating sometimes, and I’ll stand up for myself and say ‘You know this isn't against the rules, but I’ll leave if you make me. But I know this is not wrong.’ Sometimes they try to fight with me about it.” 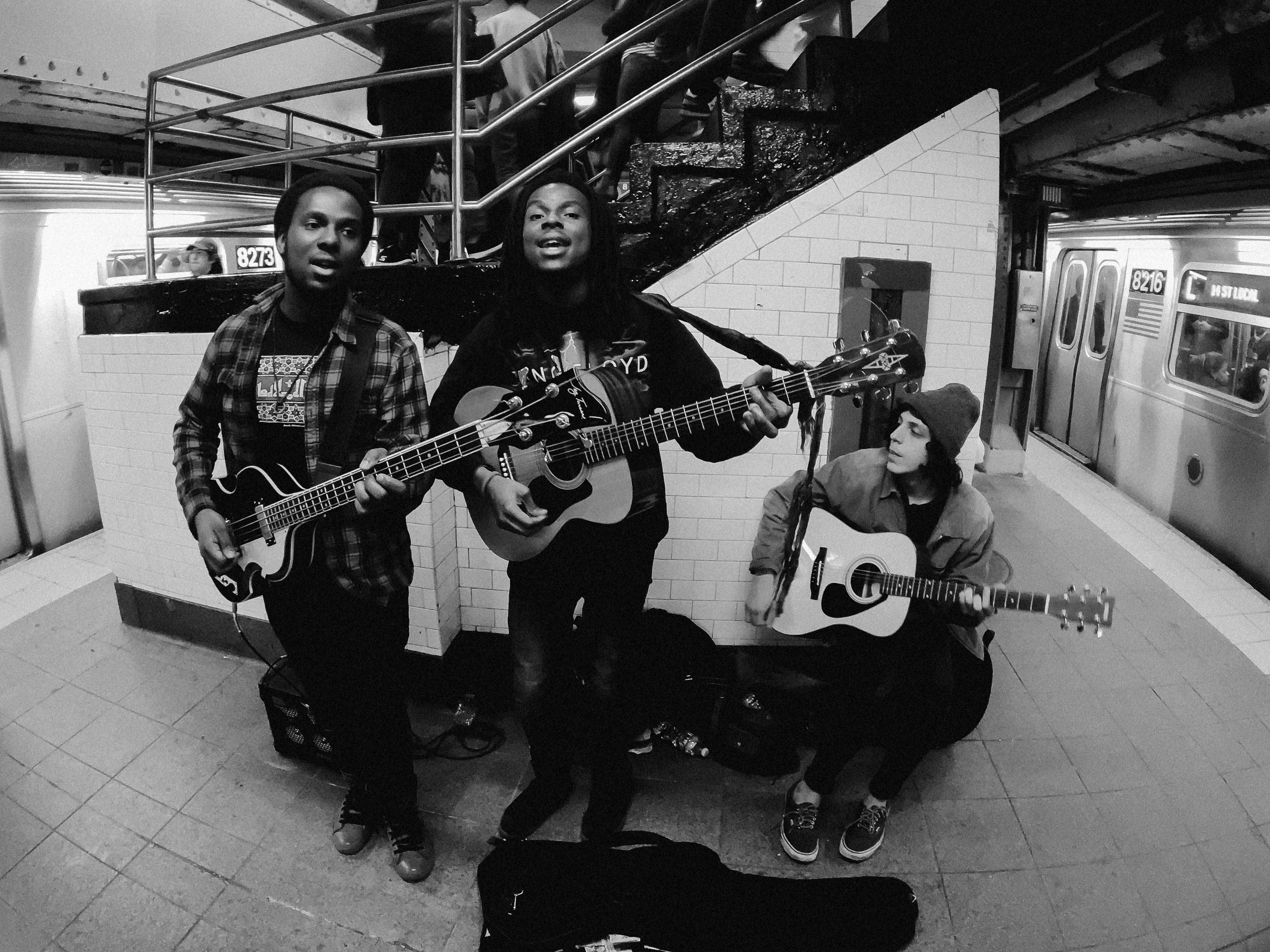 “We’re saving up currently to record our first album for our band. We have original music that we want to finish recording. We all quit our day jobs to pursue a music career. The subway is our office; we come out everyday–it's basically our job. And we’d rather work here; it’s a great way to meet people and creatives like yourself.

Back when we didn’t know where to play legally, we used to play in the train cars. It was the most fun we’ve ever had. One time we made $140 in one train car. People were throwing 10s and 5s and 20s at us.” 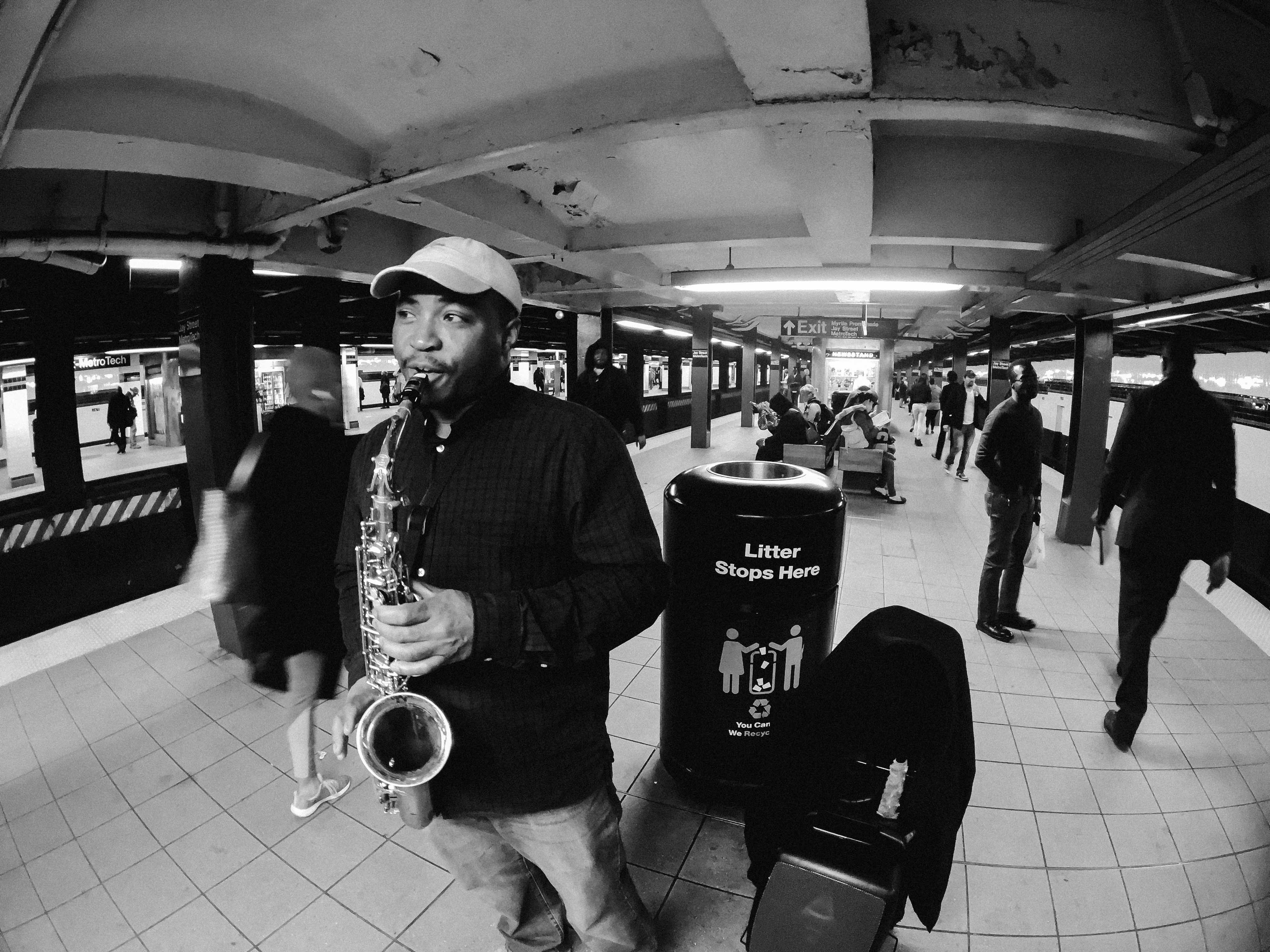 A saxophonist and pianist from St. Vincent and the Grenadines | clintsvg@gmail.com

“Busking, It's one way of keeping myself busy, and it gives an extra income.

My most memorable time was when I was playing a gospel song and people started to sing along. It made me realize that some people still appreciate gospel music, and they look forward to hearing it.” 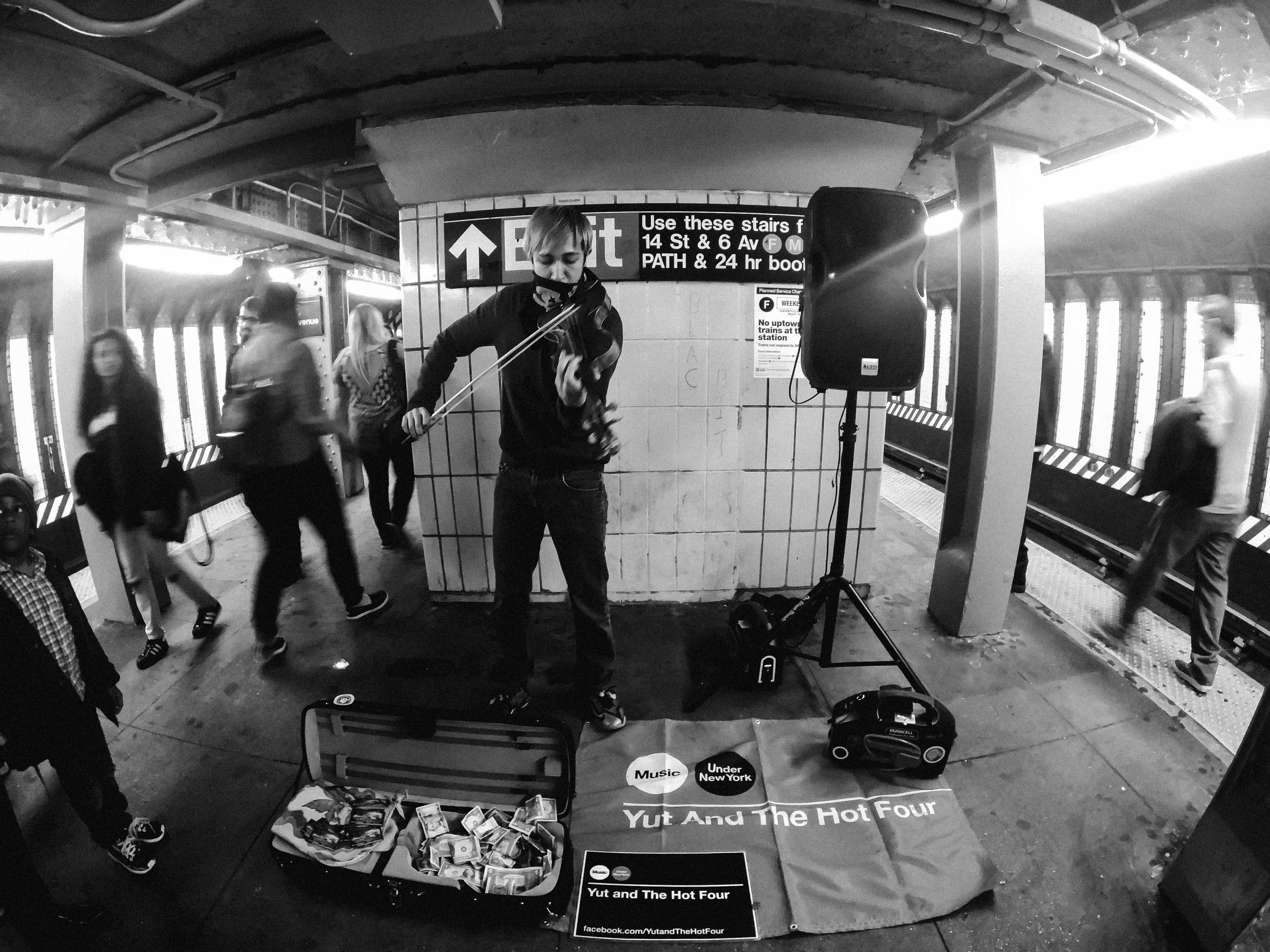 Bandleader, Yut and The Hot Four. The group is well known for their mashups.

“As a child, I was always interested in classical music, but my family couldn't afford lessons ‘til I was 12. When I started playing, I would practice 5-6 hours a day to catch-up–kids usually start at age 6 in the classical music world.

I started playing in the subways at 17. Soon after, I formed the band Yut and The Hot Four. The band’s core musicians include a cellist, violinist and an arranger/pianist. Performing all over the city, I’ve been fortunate enough to cover several events for the The New York Times.”

Yut’s undying passion for sharing music has secured him a spot with Music Under New York, a well-known subway organization that highlights the city's top musicians. 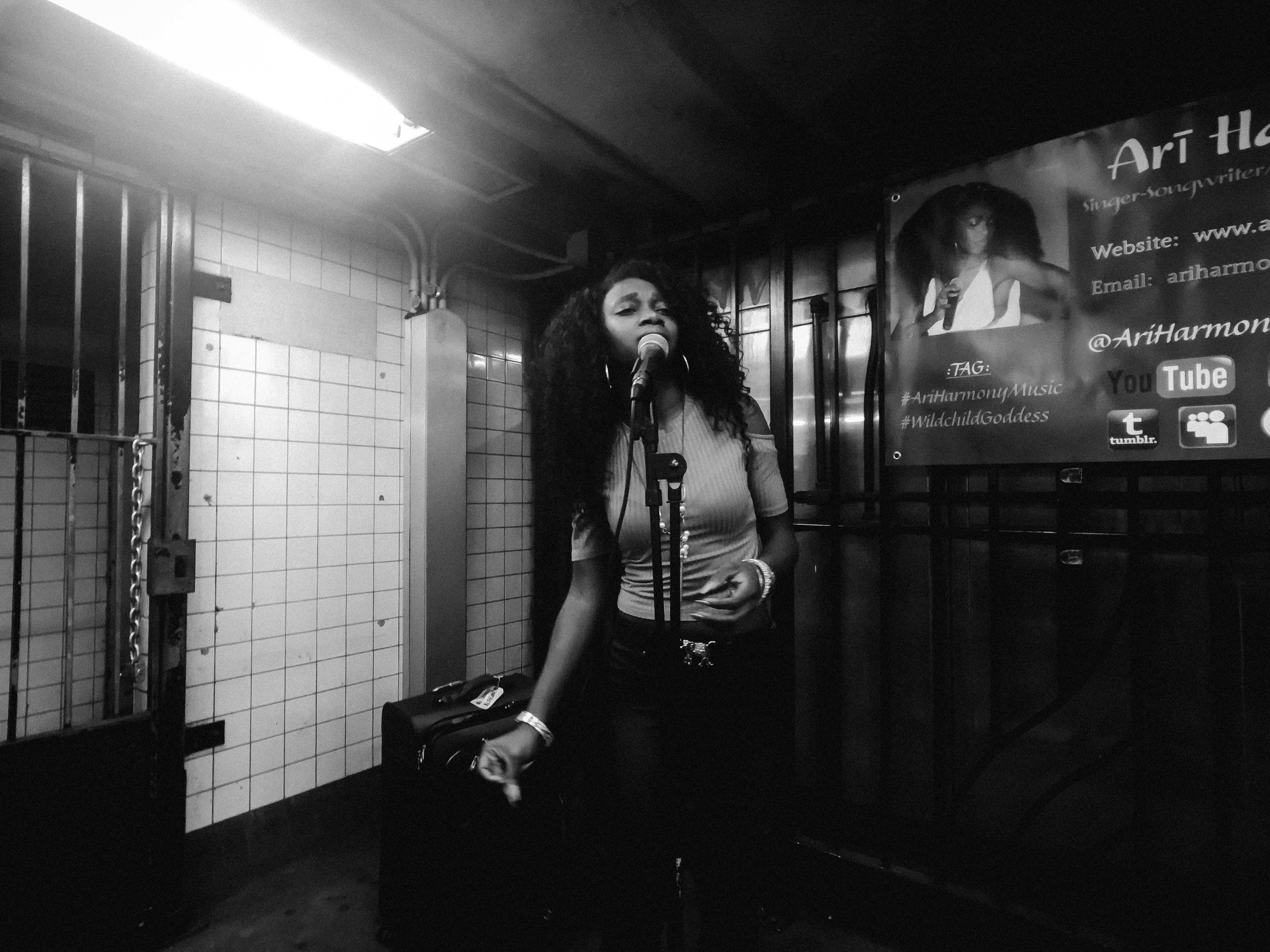 “I started music in elementary school, but I used to rap. At 13, I decided to perfect my singing voice, and I’ve been doing that ever since. I moved to NY in 2013 to pursue my music career, and soon after started performing underground. I love meeting different people and performing in front of people.

I also enjoy playing in the subway because I can build my own platform. My audience builds on its own, and I get reactions from different background and ethnicities–it's just awesome to have a multi-culture behind you that supports what you do.” 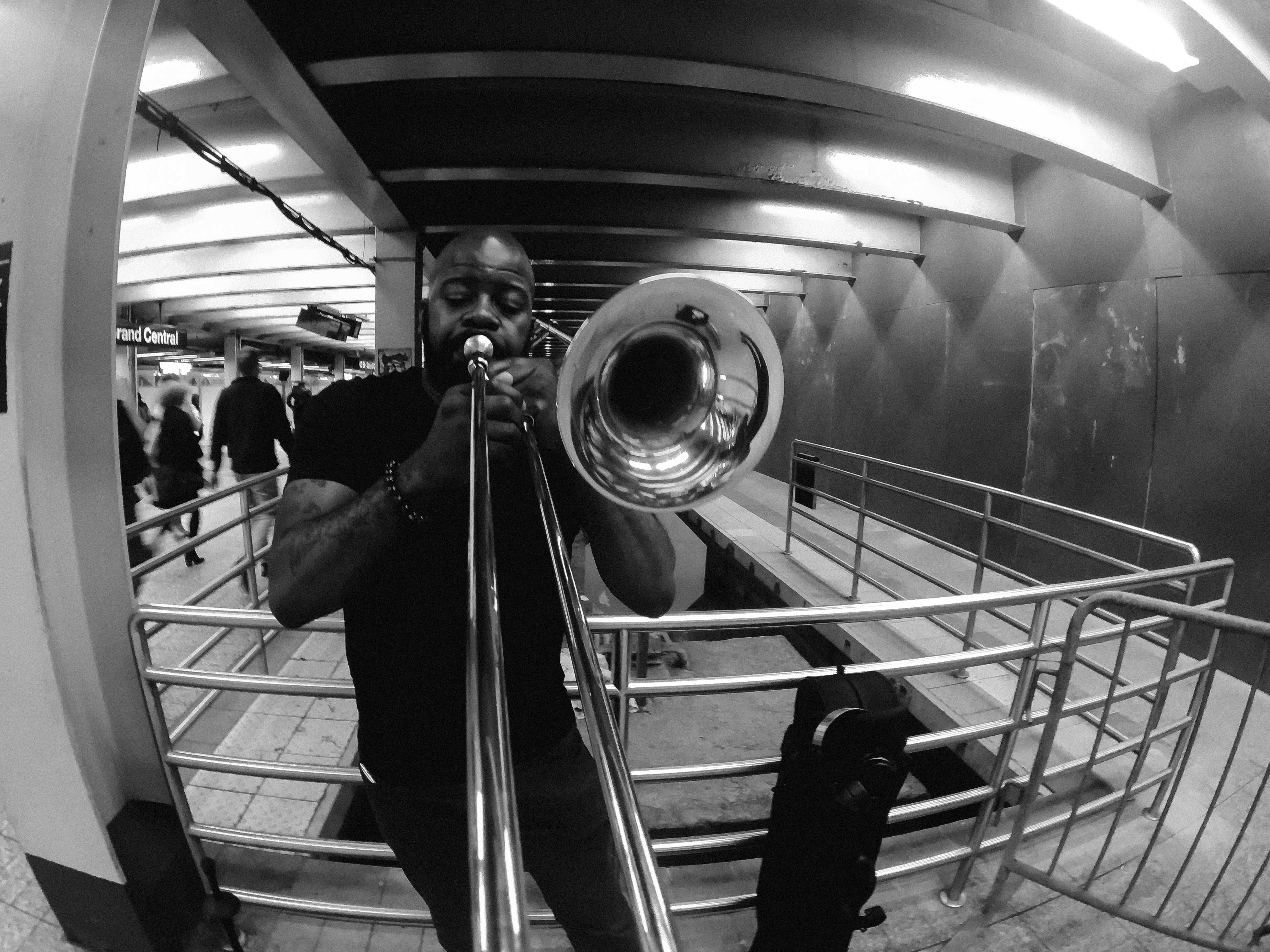 “I started playing the trombone about 10 years ago, but I’ve been playing horns all my life. When I was younger, my dad took me to Italy, and I saw a guy riding a unicycle while playing the trumpet, and I told my dad, ‘I’m going to be that when I grow up.” I kept barking at him about it, and eventually he bought me a trumpet. He sent me to a band to learn how to play when I was seven, and that was it.

I’ve been busking for about 4-5 months. I started playing underground after i saw a student of mine playing down here, and I just thought it was really interesting. People seem to really take to it. So for me, it’s more about making people’s day easier during their busy commute. So I play a lot of slow music–I slow them down, give them a smile and make them feel better about their day.

My underground experience has been really good. Even when I’ve run into guys who are sanctioned to play, they are usually friendly, and the reception from the public is pretty good too.

The most memorable time was two month ago. There was a lady down here with her kid, and as she was walking past, her kid turned around (she was probably 5 or 6), walked over and hugged me while I was playing. I looked down, stopped playing, and gave the kid a hug. The kid then said, “You are beautiful.” I was done. I cried; we took pictures; it was the most memorable time.

Two weeks ago, the little girl’s mom came back and said her kid started playing the trombone.” 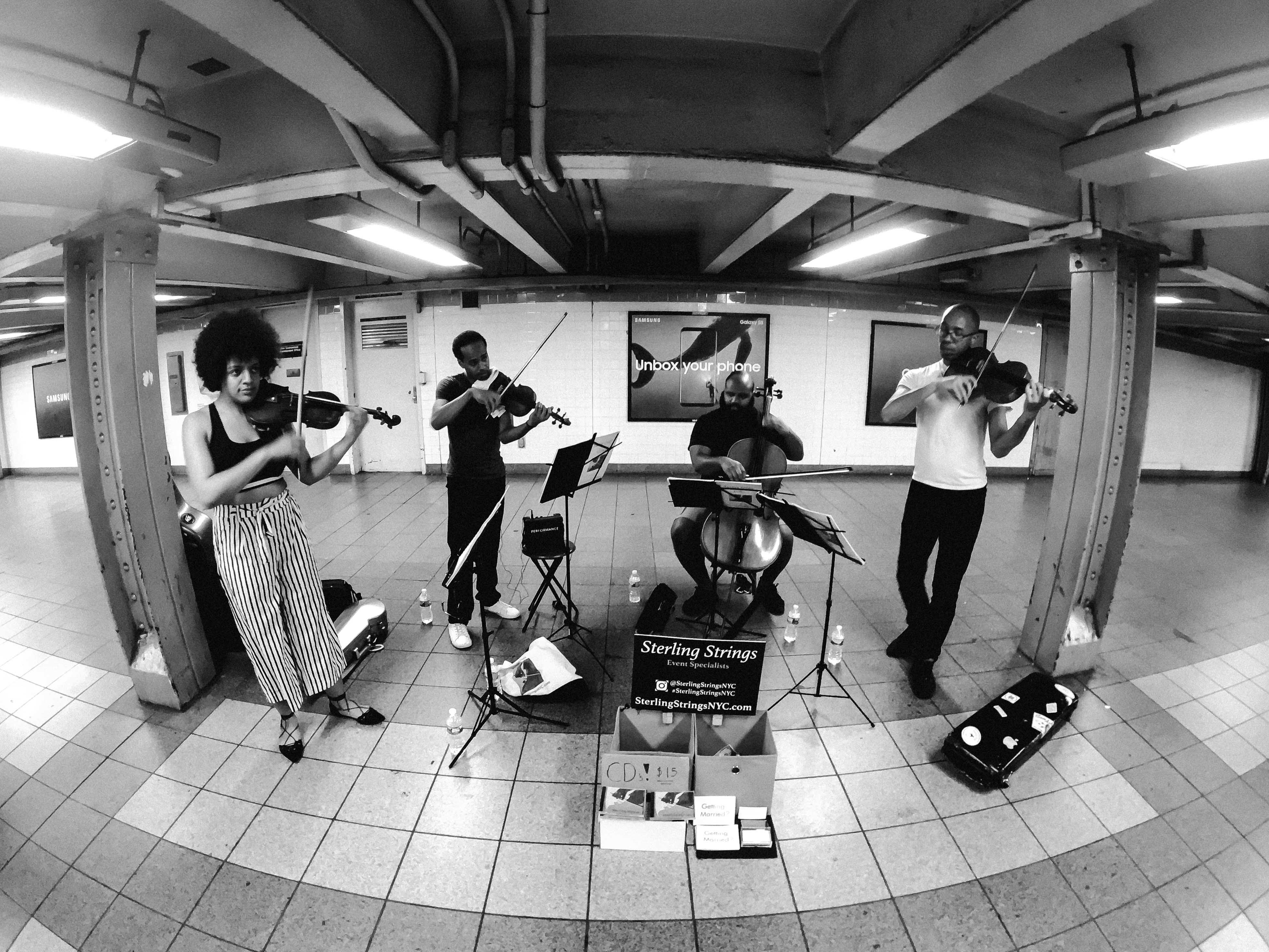 They all meet while playing for another group and decided to come together form their own.

Playing under the name, Sterling Strings, they’ve performed in many major concert halls and venues like Carnegie Hall, Lincoln Center, Merkin Hall, The Tonight Show to name a few. For them, playing on the subway is the perfect advertising tool for their business and opens up so many networking opportunities.

Fred (26), started playing when she was three. “My mom made me, she thought it would be cool for me to play the violin so she signed me up for violin and I’ve been playing ever since.”

Daniel, “my brother used to play. “i was inspired by him”

Eric, been playing since he was 14.

Playing in the subway really allowed my career to happen as a musician.

Every since I could remember sound always interested me and I felt like I really had a deep connect with it. I grew up playing in church and there has always been a deep spiritual connection to music for me.

When my band started playing, on this platform actually in this very spot, people used to get so crazy and the whole platform will be filled with people dancing–it was out of control. The police used to come down and break it up. It seemed like a riot was going to happen.

I think my most memorable time was that day when Modest Mouse’s show got cancelled and we were busking. So all the people who wanted to go to the concert came down–they were all ready to dance. There is also viral video online of our performance. 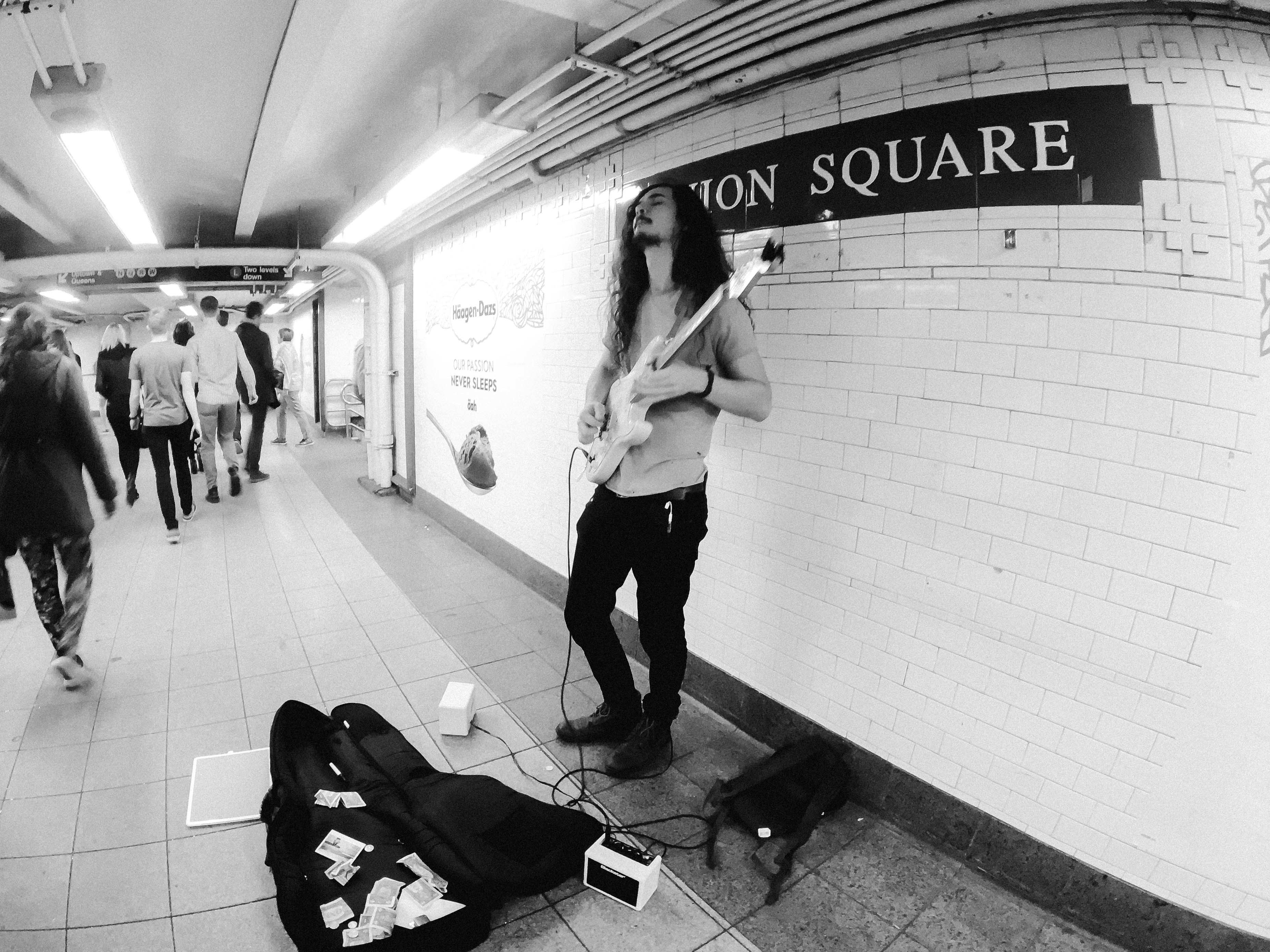 Chris, 20 year old guitarist, from Miami, Florida. He moved here about 4 month ago to pursue his music career.

I started playing guitar because of obsession with the game, Guitar Hero. I saw that, played it, and got really good at it. I thought to myself, ‘why don’t play the real thing’. So I started playing guitar when i was about 12 years old. I took about 3-4months of classes, but everything else was pretty much self taught. My favorite band is the beatles–they are my all time favorite band. However, I started off guitar liking a lot of heavy metal then transitioned into more 70s-80s rock.

The NY subway system–so many people pass by each day. If I stand here and played for 4-hours, thousands of people would be passing by and you never know who you're going to meet...and in this industry it’s all about making connection.

One of my favorite things in when children pass me...they always seem very happy and excited and it makes me feel that that I am doing something good.

A lot of people approach me and ask my things like what you're doing interviews, documentaries etc… and one time someone filmed me from far away and didn't notice them. Soon after I started getting a huge following from Spain. One person commented they say me on TV and sent me a link to documentary that telemundo did for telemadrid about NYC. They shot me for a couple seconds then a close up of my sign..and that gave me the exposure. It was pretty cool. 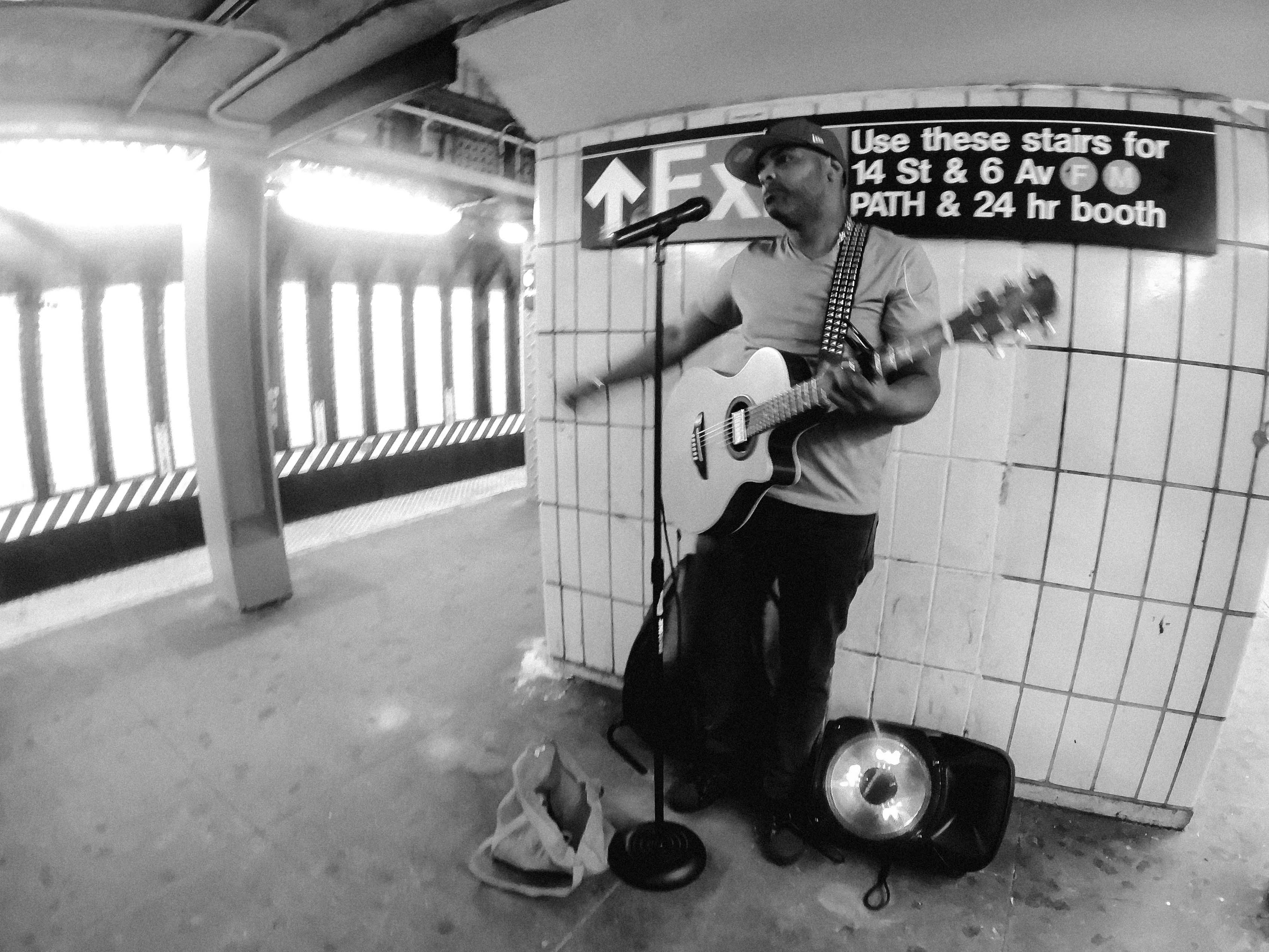 My name is Tito Rivas from the Dominican Republic. I’ve been doing music for over 15 years. In my free time I come out to play my music. You can find me on YouTube. One of his song is called "prisoner and love" (prisionero y amor)