They’ve been featured by Brides.com and countless other wedding publications. Because they’re doing something game-changing. White In Revery, a creative duo out of Denver, CO, is throwing the old approach to wedding videos out the window and making full-production cinematic wedding films. And best of all, they’re doing it on mobile.

Moment’s resident filmmaker Caleb Babcock sat down with them to get the full story and some tips for us.

What made you guys decide to shoot these incredible films on iPhone?

To be honest, we just thought it would be fun and challenging! We tend to get caught up on the latest gear and are always looking to see what’s next, so we have to try to keep ourselves in check by remembering that a couple’s story and the filmmaking techniques are more important than anything.

With that being said, we noticed that Apple had an obvious upgrade to their cameras on the iPhone 7 and 7 plus and wanted to challenge ourselves a little. We didn’t want this to be a stylized shoot but an actual elopement with a real couple and an amazing story. The couple that we ended up filming actually almost booked us earlier to film their elopement, but we ended up postponing. They won our hearts during the consultation, so they were an obvious choice when trying to pick a couple. 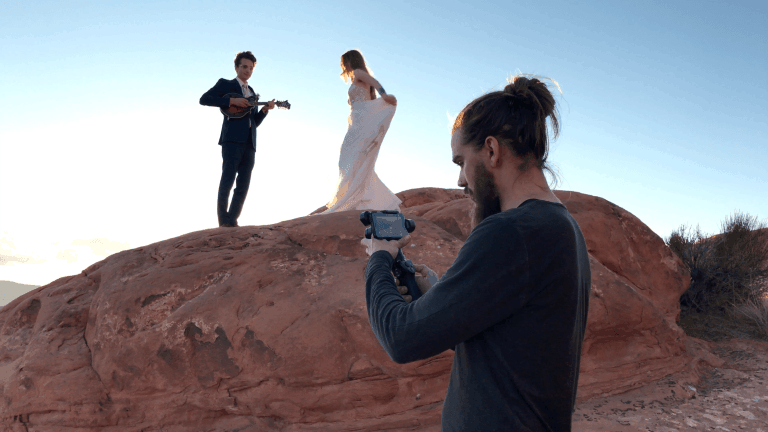 Did you do anything for pre-production, knowing you would be shooting all mobile?

Naturally, we got pretty excited and jumped straight into the world of iPhoneography. Researching and testing out gear for our iPhones was equally the most fun and difficult part of preparing for this shoot. We also knew that, leading up to Kaleb and Evita’s elopement, we were working with a faster turn-around time, a rushed shoot date, and the fact that they were in the middle of midterms.

We knew that the couple wanted to elope in Moab, which would allow for direct sunlight. Implementing a proper ND filter was the most important set-up piece so that the shutter speed was controlled and we could avoid that ‘iPhone’ look of jagged motion. There was nothing anywhere online at the time for ND filters for iPhones, especially if we planned on using Moment lenses. So we did some research. We were looking for an IRND filter instead of just an ND filter because of the IR pollution with the iPhone lens. Hoya had just released an IRND filter a month before the shoot, and they had it in a 49mm ring size, which was the smallest we could find online. It worked perfectly without any IR pollution or vignetting from the filter.

We also wanted this film to reflect our other work, which meant we needed some of the same stabilization gear to support the iPhone. After tons of research, we found that the Beastgrip Pro was the perfect cage rig for the iPhone that allowed us the most versatility with shooting. It allowed us to connect to our monopods for stable locked down shots, while allowing for a great handgrip option. Since we use the DJI Ronin-M as our main gimbal, we knew we wanted that same feel translated in this film as well. So we tested out the DJI Osmo Mobile which worked so perfectly when paired with the iPhone 7. 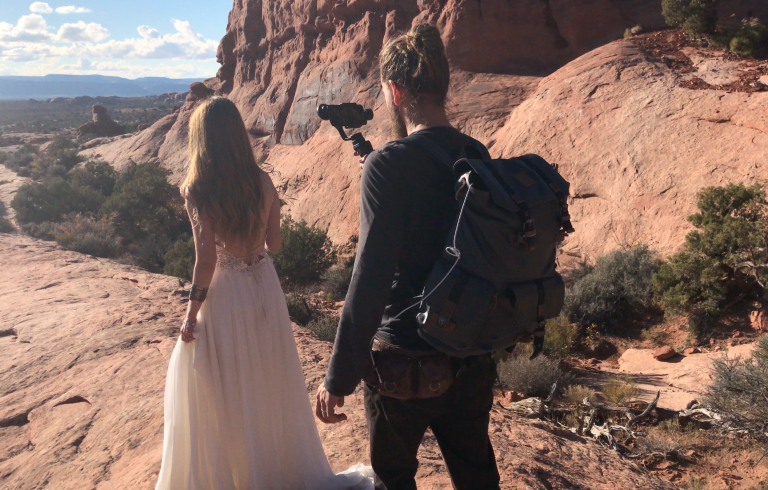 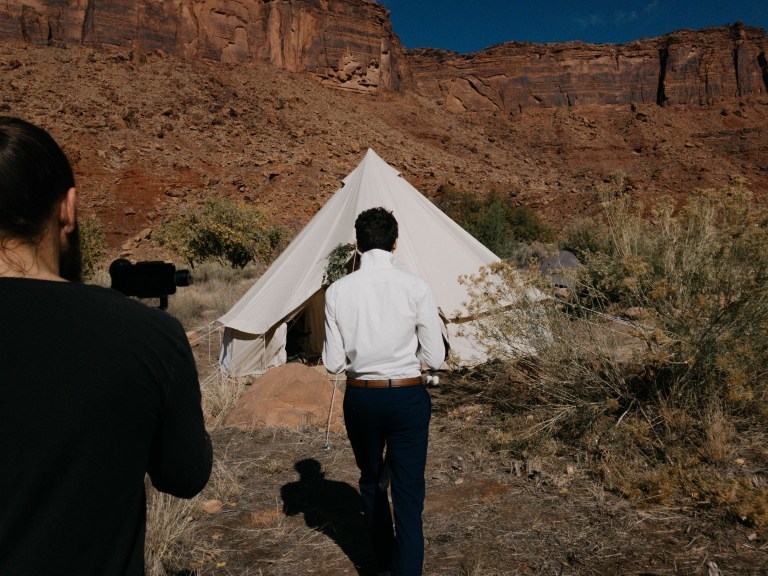 What were some of the biggest challenges while filming?

The most interesting challenge was rigging the Beastgrip, Moment lenses, and the IRND filter to work together. Our first solution revolved around the fact that Hoya Solas IRND filtershave a 49mm thread ring. We could easily attach this to the Beastgrip Pro with a 37mm-49mm step-up ring. With the Moment lenses, however, we had to do some more rigging.

Lastly, always a notable challenge for photographers — weather. Upon arriving the night before the shoot, we were greeted with a giant storm! It was a bit of a nightmare getting the tent set up (in the dark) because of the wind was so intense. Luckily, it came together, and we woke up the next morning to gorgeous weather.

This film looks absolutely stunning. Can you give us some secret tips for making iPhone video look this good?

It’s hard to say. I could start by saying that your video will always be so much better when you’re excited about the content. Kaleb and Evita are just incredibly adorable together. They just beam with awe for one another and naturally melt into each other’s arms, which made it easy to direct and film them. And audio also takes a film to the next level, so we loved how precious their vows were.

Outside of content, we always feel it’s important to vary your perspective while filming. As we planned out our structure and style for filming on the iPhone, we didn’t want the viewer to notice that it was filmed on an iPhone. So we had to minimize the things that made you think “oh, this was obviously shot on an iPhone,” such as the lack of depth of field and the high shutter speed due to the fixed aperture. So we purposely did a lot of rack focusing on certain shots and even filmed out of focus a few times to make the viewer feel like the camera actually has depth of field, when in reality, it doesn’t. As for the high shutter speed, finding the perfect ND filter for the iPhone was crucial to making the footage look smooth and professional. 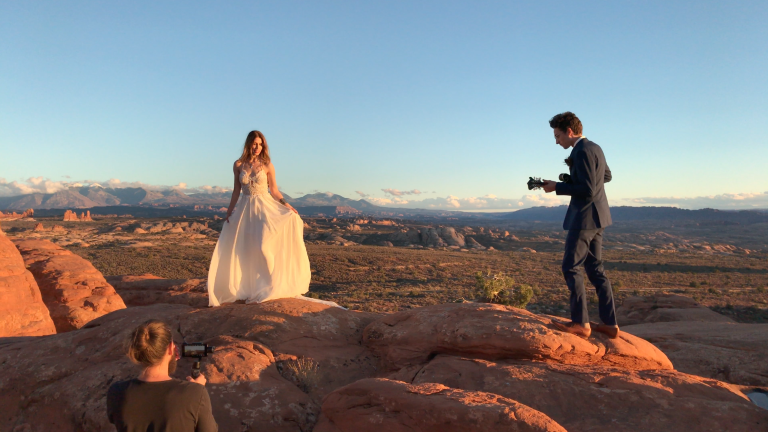 What other gear did you use on this shoot?

As we mentioned, our main rig was the Beastgrip Pro. We connected this to our Benro monopods for all of the stable shots. For the gimbal shots, we used the DJI Osmo Mobilewith the iPhone 7 and Moment lenses. We mainly used the Moment Wide lens with this configuration and ND filters, but also used the Moment Tele lens and even the Superfish Lensfor a couple shots.

We ended up using the Moment Macro lens for artistic imagery instead of its most common use. We purposely used the macro as a blur out-of-focus shot, which created this really mesmerizing look that couldn’t have been replicated by just rack focusing to infinity. For the audio during vows, we used the Rode Smart lav, allowing us to work with really great clean audio signal. 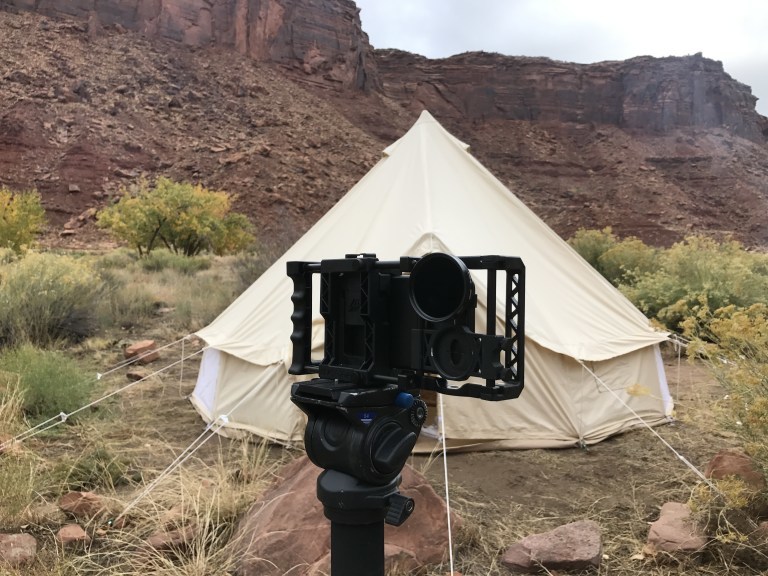 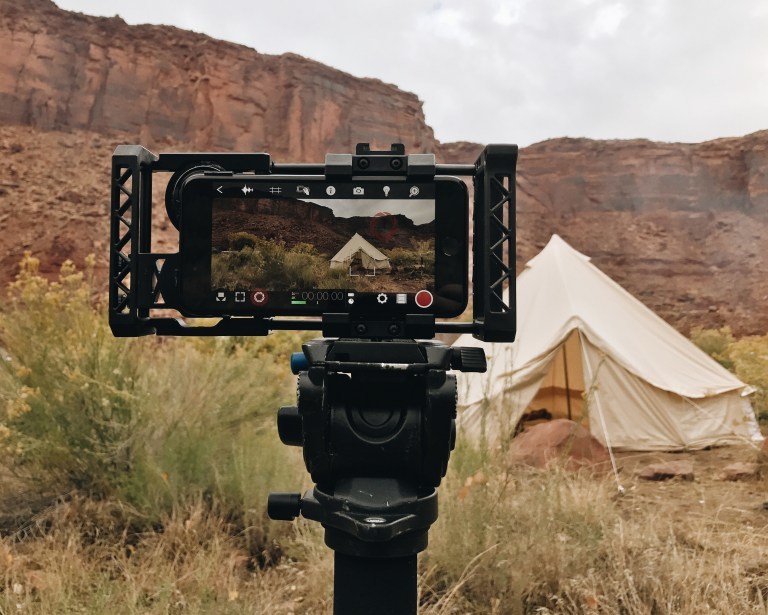 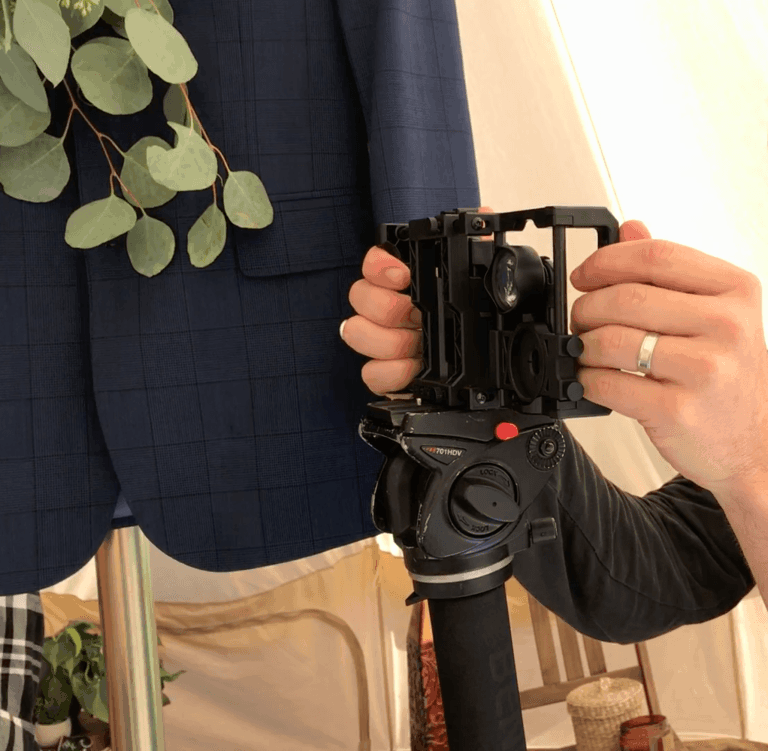 How did you go about color grading the iPhone footage? Was it different from working with traditional footage?

We’re used to color grading footage that has great dynamic range — where we can push highlights and shadows much more. We put our typical LUTS on for the first round of coloring to just see what it would look like, and it was terrible! We definitely had to lower our expectations with how much we could push colors around, and as soon as we embraced that, it started looking better.

We knew that filming in Moab would create a nice backdrop of deep orange landscapes and blue skies, which would make the couple stand out well. We pushed the blues from the sky more toward the teal range and the oranges toward the darker more saturated range.

Because the iPhone sensor has an 8bit 4:2:0 H.264 codec, we couldn’t push the colors as much as we would have liked to without introducing artifacts or banding. Also, we noticed that when we overexposed shots on the iPhone 7, instead of blowing out white, the color would blow out closer to yellow making the footage look quite ugly and rendering the highlight roll-off poorly. We also had a few shots where we should have taken off the ND filter, as the sun got lower. That footage looked a little bit noisier than we would have liked, so we had to have some noise reduction from Neat Video added to them to clean them up. 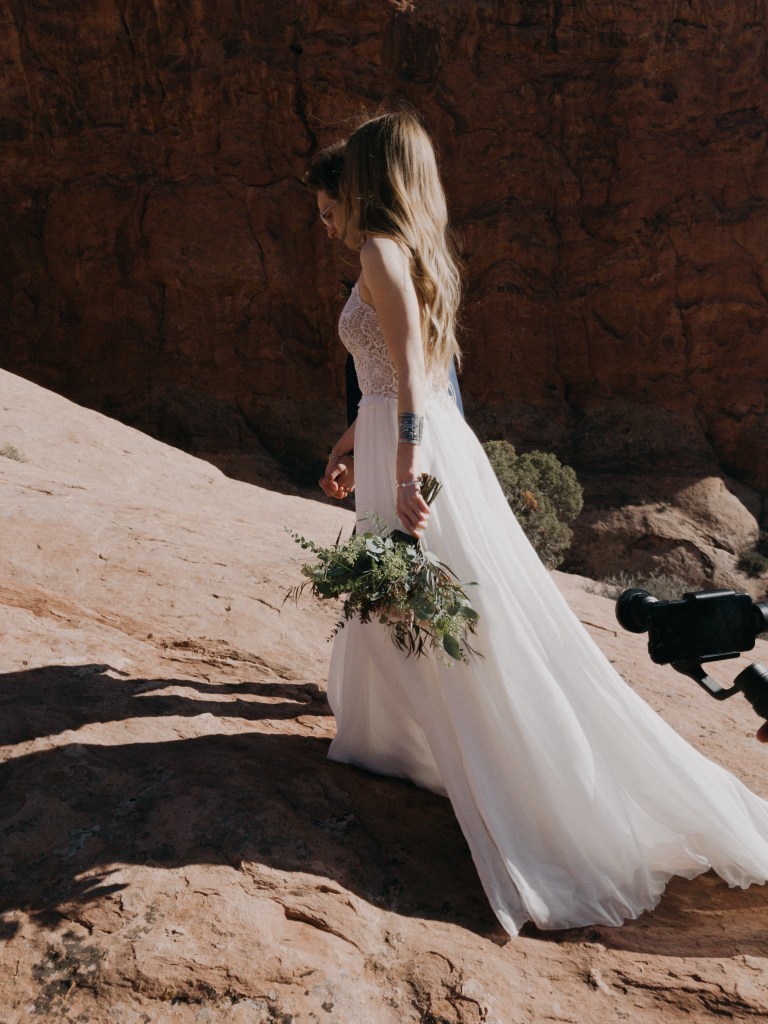 Why did you chose Moment Lenses to use?

We knew we needed more options than just the native wide and tele lens on the iPhone 7 Plus to really tell the story. The Wide Lens from Moment was our most used lens because of the focal range and no vignetting or lens distortion. Also the Tele Lens looked pretty close to the tele lens on the iPhone 7plus but was our only option for a tighter angle on the Osmo Mobile because we needed to mount an ND filter.

The Superfish Lens was super wide, but on Video Mode, it cropped into a nice focal range without coming across as a ‘gopro’ style look. We used that lens as the couple was walking toward the Arches in Moab and didn’t have any straight lines to show the subtle distortion. As for the Macro Lens, we used it by accident. We wanted to use it as a macro shot for the bride’s ring, but ended up using it for longer shots, creating a nice blur focus effect. 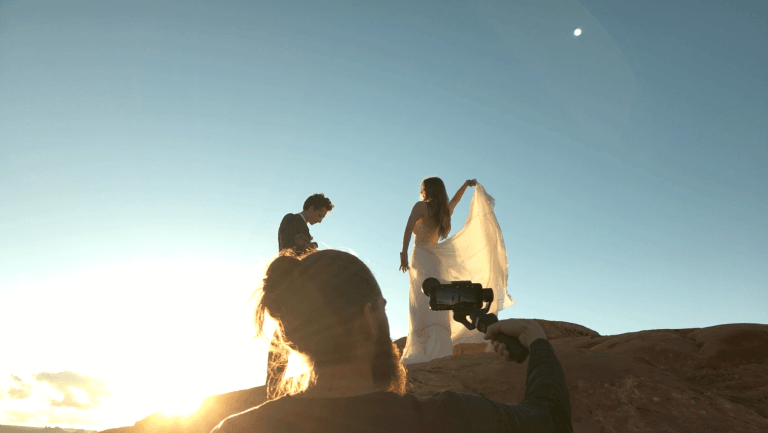 Can we expect more amazing iPhone films from you guys?

We are waiting to download the LOG update from Filmic Pro to use on a future project to really showcase the increase in dynamic range that this camera can shoot. Ultimately, we feel that iPhones are not the best cameras to capture a full wedding day, outside of an elopement, but they’re so incredible for other projects. So while you may not see us filming more iPhone weddings, we hope to put out another personal film in the coming months! 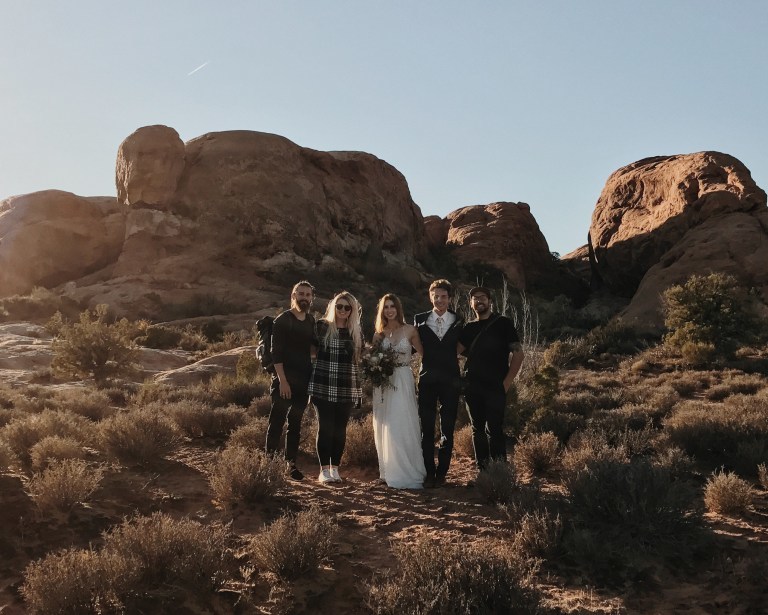